The Truepenny Trophy is awarded to the fastest Male and Female in the 10 mile club Championship in the Senior, V40, V50,V60, V70 and V80 categories. 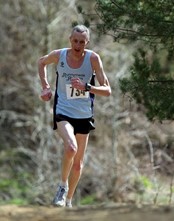 “I’d just finished running first marathon (London) and training for it mostly on my own, and I decided that to improve I needed to run with others.

Some friends I worked with had heard of Runnymede Runners and, since I lived in Egham at the time, it seemed the obvious choice. A choice that I’ve never regretted.

During my time with the club I’ve held many official positions, Race Secretary, Treasurer, Club Captain, Record Keeper and Entries Secretary for the Relays. I’ve always been a keen supporter of club races, especially the team events such as the MABAC league and the Surrey Cross Country league.

My 2 most memorable achievements have been my personal best in the London Marathon of 2:39:14 and being 3rd in the V50 category at the New York Marathon.”

David still holds many of the men’s club records