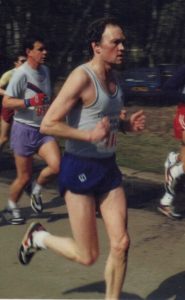 The Ewbank trophy named after Alan Ewbank, is awarded to the fastest male and female Runnymede Runners in the club 10k championships in each of the following categories: Senior, V40, V50,V60,V70 and V80.

Alan Ewbank joined Runnymede Runners in 1982, shortly after its beginning, having been motivated to join the club by a marathon running friend during the fledgling part of his running career which has seen him run almost under the 3 hour mark in the Marathon with a PB of 1.23 for the Half Marathon.

Alan was also a former Race Secretary for the club and actively encouraged all our members to take part in numerous events throughout the 80s.

More recently he has been seen supporting club members at the summer handicap and volunteering to represent RR as a marshal at many running events.